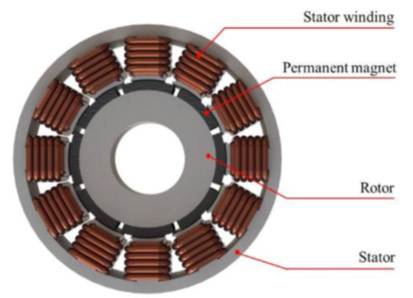 Below the basic structural and operating differences between the IPM and BLDC motor:

Typical IPM motor torque-speed and power-speed curves are described in the figures 2 and 3, consisting of Constant Torque Region (CTR) and Constant Power Region (CPR). It is evident that in the CPR region the torque reduction for the same motor current is low, especially for lower loading conditions, due to the increased reluctance torque added to the magnet torque. 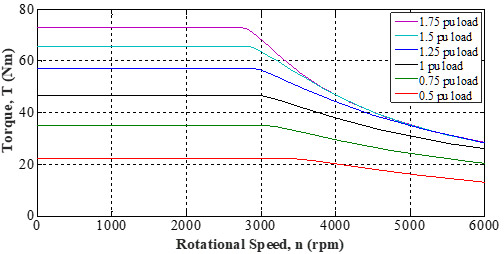 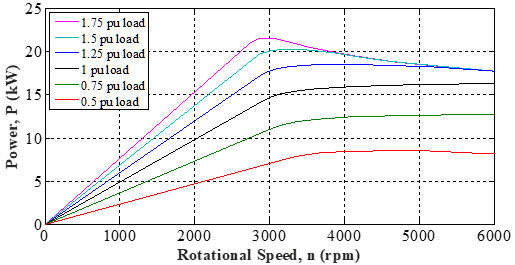 For optimal efficiency during the whole IPM motor operating range the control technique employed for the CTR – low up to rated speed region is the Maximum Torque Per Ampere (MTPA), where both torque (Iq) and field weakening (Id) currents needed to be adjusted for each required torque demand as shown in figure 4. These calculations are implemented internally in the controller, by utilizing the IPM motor equivalent d-q axis (Park transformation) circuit equations. In CTR, the only absolute limit applied in the motor is the motor thermal current maximum limit, as shown in figure 5 and the current vector is below current limit and voltage limit loops. 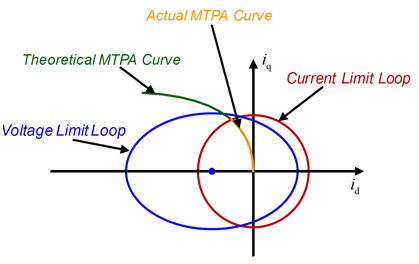 In order to effectively operate the IPM motors at MTPA curve, the following data required to be set during controller configuration from Roborun+ utility:

Or by sending the configuration command for Single Channel Controllers:

IPM motor operation at CTR with MTPA current control is supported for all BL products supporting sinusoidal commutation with firmware version 2.1 and later.

Above values are necessary in order to calculate the optimal Id, Iq current commands needed to be applied to FOC motor operation. Typically, these values are included in each IPM motor technical datasheet. Alternatively, the d-q axis motor inductances can be calculated from “Motor characterization” tool at Roborun+ utility (see Roborun+ Utility User Manual for more details).

Furthermore, the switching mode should be set to “Sinusoidal” and the FOC gains should be inserted according to the method described in “FOC Gains Determination & Tuning” chapter at Section 8 of Motor Controllers Manual, considering as phase inductance the d-axis inductance Ld for flux proportional gain and q-axis inductance Lq for torque proportional gain, respectively. It is noted that the IPM motor operation algorithm applies only at close loop operating modes, including FOC torque and flux gains. In all other cases, IPM motor can operate as a brushless dc motor.

Consider the IPM motor with the following characteristics provided from manufacturer:

When the motor operates in the high speed region - CPR, the MTPA d-q axis motor currents should be appropriately regulated, in order to satisfy the voltage limitation defined from battery dc voltage and PWM modulation method utilized, in conjunction with the current limitation, as shown in Figure 6. Therefore, the field weakening Id current should be increased, in absolute value, at this mode of operation to weaken the permanent magnet field and thus, the produced back-EMF of the motor. 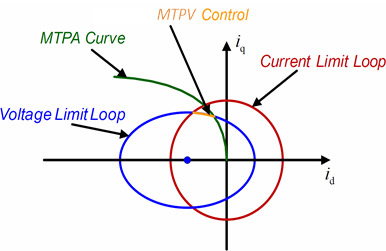 All RoboteQ BL products with new G4 MCU generation and firmware version v3.0 and later support the automatic field weakening operation, permitting the operation of IPM motor in the CPR within voltage limit.

In order to effectively operate the IPM motors at field weakening - CPR, the following data required to be set during controller configuration from Roborun+ utility:

Or by sending the configuration command from Console tab: