I'm using a SBL2360S with a MMP Brushless motor. I initially was running a smaller MM BL motor and it ran really smooth but didn't quite reach the torque needed. We ordered the next size up but now I get a bit of chatter at low speeds. High speed is still smooth as butter but low speeds sound gritty under no load (have not tested under load yet). What else can I check? The motor data sheet has pretty limited info (attached) and the wiring designations are shown as M1,M2, M3. I initially thought I had these correctly mapped to W, V, and U but now I'm not so sure. The hall effect wiring checks out ok per the color codes so I don't think its that. The only other thing that concerns me is that the measured RPM in the roboteq SW seems incredibly high and i know its actually lower so I suspect I have a motor or pole setting off somewhere. Since it runs well though at speed was hesitant to go randomly shifting things as I want to make sure I'm optimizing the torque.

Also, I'm running the motor open loop and questioning if that's the best approach. The application is a tool actuator using a giant gear reduction so position and speed accuracy are not needed. Can anyone summarize how the torque mode (loop) is intended to work? 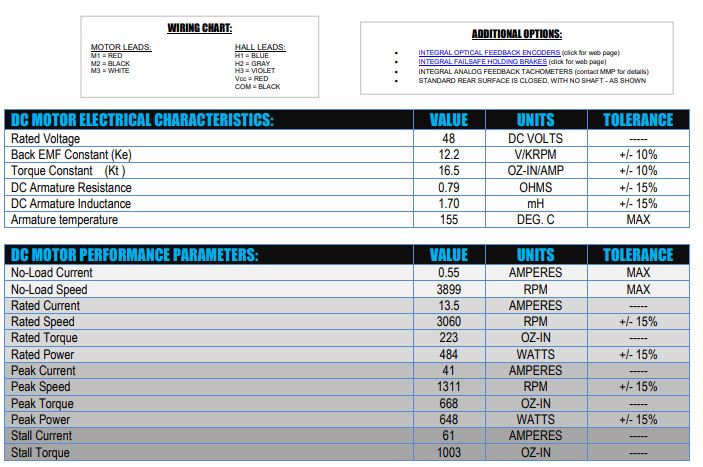 4 years 7 months ago #29533580 by Gabriel_Isko
Replied by Gabriel_Isko on topic SBL2360S Motor and Hall configs
What speed do you start seeing jitter and incorrect RPM readings? It might be related to the resolution of your Hall sensor feedback.

Torque mode tries to control the current flowing through the motor regardless of speed. The SBL2360S has current sensors on its motor output channels, so it should be pretty good at this. Since it sounds like you are just trying to actuate a tool head, and I imagine you would prefer to maintain an constant load, this is probably a great control mode for your application.

Less More
4 years 6 months ago #29533761 by rtc719
Replied by rtc719 on topic SBL2360S Motor and Hall configs
Thanks, I tried the torque mode but seem the motor doesn't respond in that mode. I also noticed the brake which I have connected to Dout1 doesn't respond either in that mode so I suspect that is not helping.

I was able to resolve the chatter by connecting both power inputs to power and it runs smooth now. I assumed the shared channel of the 2360s used a common internal power connection but i guess not.

New problem is that now I can't seem to get more than 35A to the motor during despite the motors peak draw being well above 60A and setting the controller amp limits to 50A. I did just realize it has a separate stall limit so going to try that next.

Is it realistic to expect the current to max out in open loop mode or do I need to run in a torque mode to get it to push more amps when it slows?

4 years 5 months ago #29533770 by Gabriel_Isko
Replied by Gabriel_Isko on topic SBL2360S Motor and Hall configs
At full 1000 motor command in open loop, using a 48V supply, the motor should show a 61A current draw at stall. This might also destroy the motor since it's peak current is given as only 41A. If your power supply is 48V and your motor is stalled, I am not sure what is going on. However, in open loop, current draw isn't really something that is determined on the controllers end. If the controller is limiting itself to a certain motor command than it is something we will have to trouble shoot, but if the motor is simply just not drawing that much current then there is something wrong with the posted specs.

Which movement mode the controller is in shouldn't have any effect on the digital outputs. Can you confirm that this is effecting your brake by manually switching the digital output on and off in the Run tab of Roborun+?

Less More
2 years 9 months ago - 2 years 8 months ago #29534936 by ByronDonald
Replied by ByronDonald on topic SBL2360S Motor and Hall configs
Hi..I test them in a Chinese driver and it's also working, but when I run them into the RoboteQ driver they don't respond in a trapezoidal or sinusoidal mode.
I check the hall sensors connected to the Oriental Motors driver with oscilloscope and they looks well pulsing, but when the sensors are connected in the SBL2360 they don't respond and only stay in low level.