A production model Robopad assembly was mounted in the motorized test fixture with a spacing of 1cm between Extendable Collector and the Charging Base. The Collector was moved in a linear fashion back and forth in both directions over the Base traveling six inches past the end of the Charging Base on each side. This action was repeated with a 2 second cycle time, therefore every second the Collector made physical contact with the Base. A moderately sized DC motor was used to drive the motion, and was run both day and night until test unit failure. A total of 721,000 contact iterations were achieved, when the test was stopped after the Inner Extendable Collector would no longer fully retract into the Outer Collector Housing.

Test Fixture. Two parallel ball bearing slide rails were joined by a small plate in which the Extendable Collector was attached. A crankshaft type drive moved the slide rails back and forth approximately 12 inches over the Charging Base which was bolted under the center position of the rails. 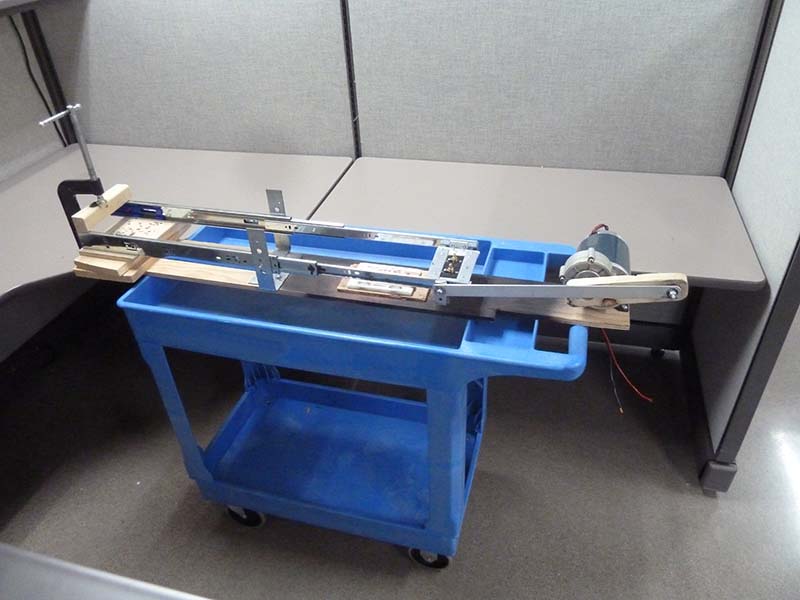 The guide rails were driven with a DC motor seen on the right side here of the fixture, with a 10 inch lever driving a crank rod connected to the rails. A cycle time of 2 seconds was achieved by setting a regulated power supply to 2.6 vdc. The desired rate of 3600 actuations per hour was set, and 200 hours of operation yielded the final value.

This image shows the state of the base contacts after 721'000 cycles. The contacts are worn but remain fully electrically functional. The pads are nominally 3.18mm thick, and one pad wore to 2.88mm on one end, and the other wore down to 3.05mm. This is a maximum loss of 0.3mm or 9.4%. 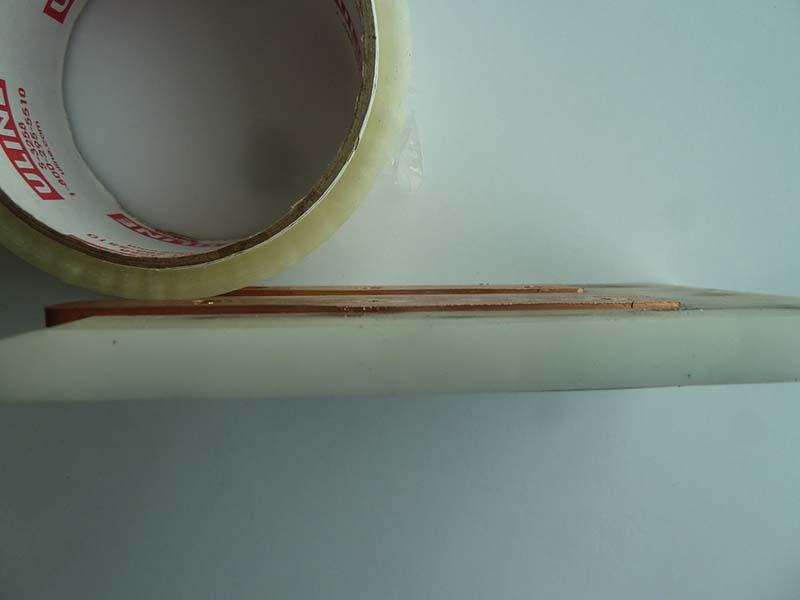 Viewed from the top, wear on the copper was more toward the trailing end. Note that the wear pattern on the copper is symmetrical around the center magnet underneath. 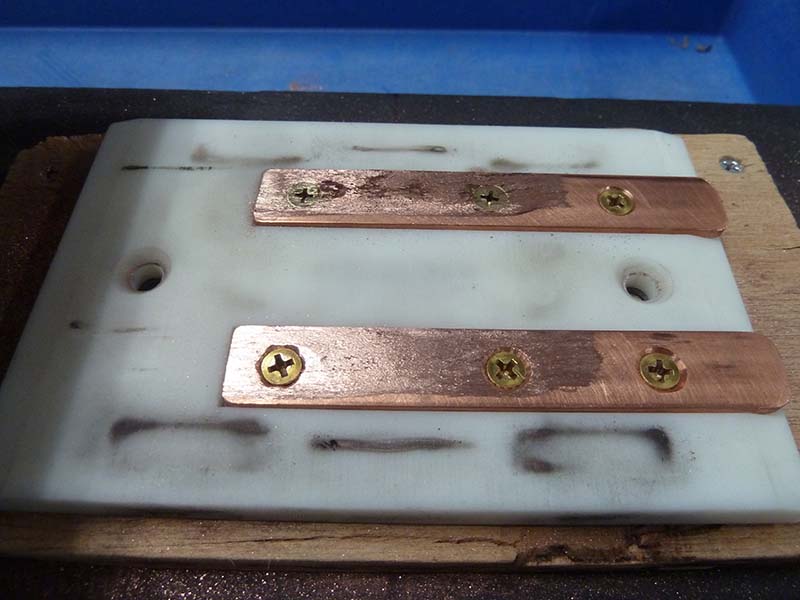 A fair amount of copper dust accumulated around the pads. The dust was too thin and too spread out to cause any danger of short circuit. In a real-life environment, it will take years to log as many cycles and dust will typically not accumulate as it did in this very confined and accelerated test.

Taken just after the unit failed at over 700,000 impacts, the Inner Extendable Collector is no longer retracted fully. However, despite this, it still did not hit the base as it entered and was able to extend and make a good electrical connection (ohm meter) with the base contacts. 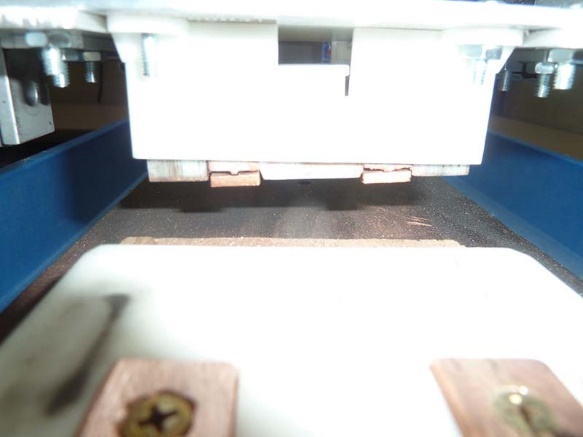 Outside side view of the Outer Collector Housing showing no wear. 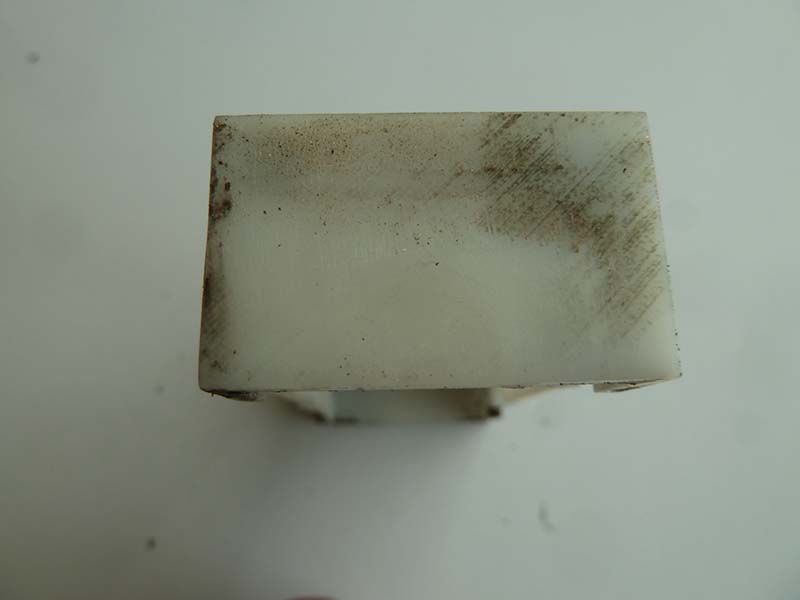 Inside the Outer Collector Housing with the Inner assembly removed. This shows the Teflon guide to be in perfect condition. Some copper dust entered and mixed with the PTFE lubricant but did not cause extra wear or added significant friction. 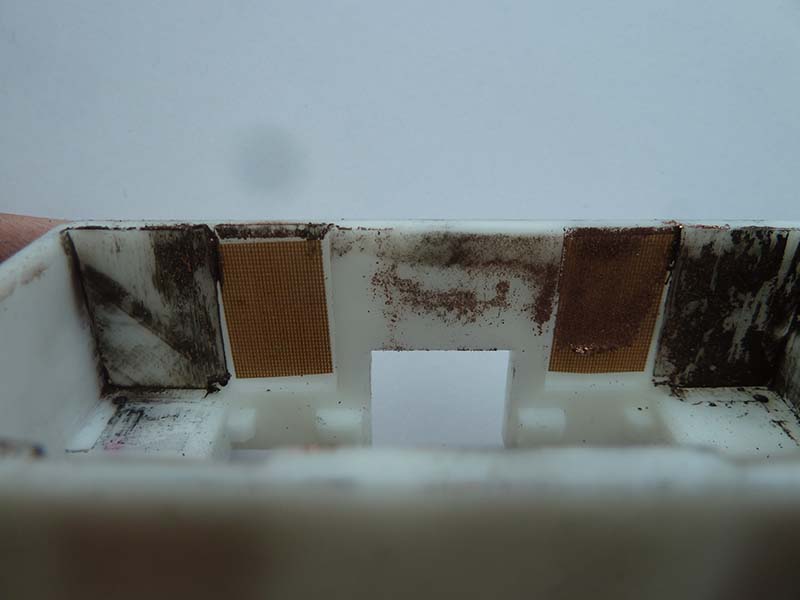 The collector pads had relatively little wear and remained fully capable of the maximum rated current. Total wear was measured to be around 16 percent on the ends and 10 percent in the middle. Small amounts of very finely powdered copper accumulated along the sides but did significantly alter the lubricants performance. 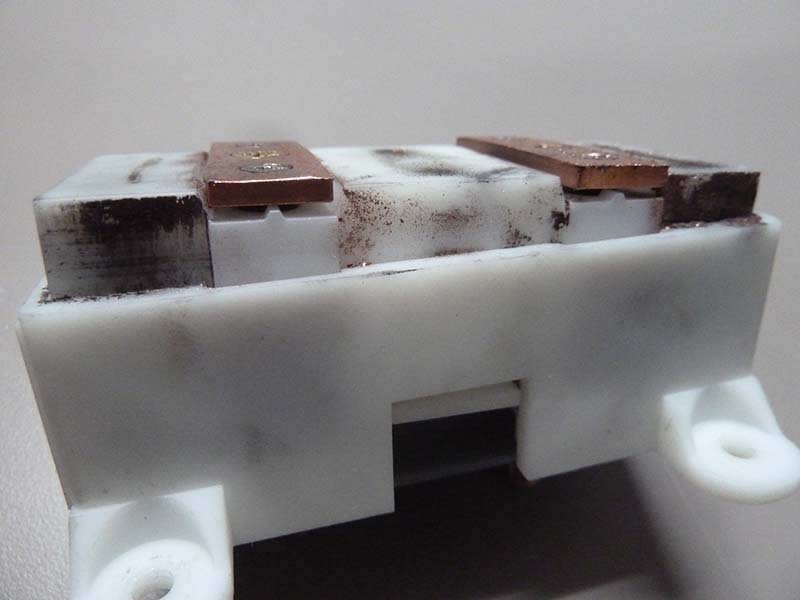 Inside the Inner Extendable Collector was relatively free of copper dust. 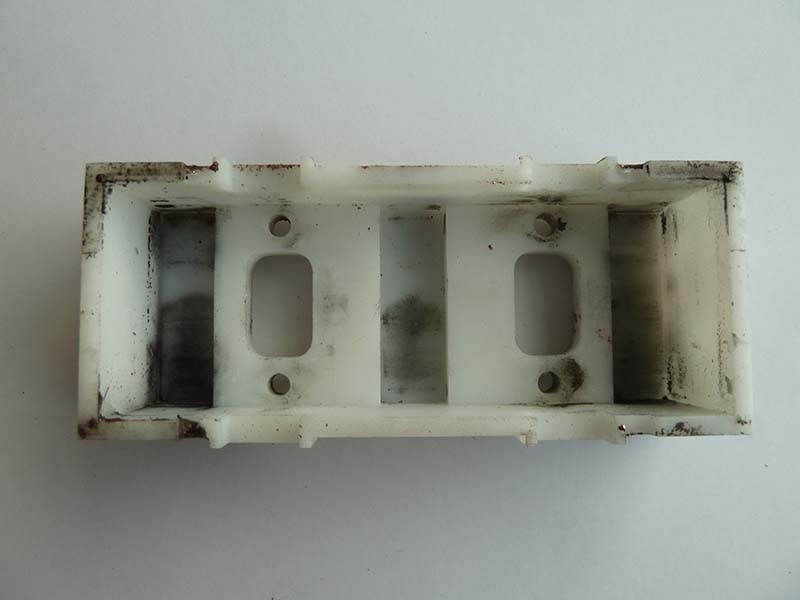 The Magnet Lock plate broke right along the narrow area that locks the nylon-lock screws nuts in place. When this broke, the magnet jumped out of its pocket upward, and the Inner Extensible Collector would no longer retract fully. This is the leading mechanical failure. This area of the design will be reinforced as a result of this life test.

The Accelerated Life Test of the first pre production Robopads revealed a lot of strengths and a few minor weaknesses in the design. The use of the brittle and high wear white 3D printed plastic had a higher than the desired level of friction, and ultimately broke and caused the failure of the Extendable Collector. The less brittle and more durable ABS plastic that the production versions will be manufactured from should eliminate most of the mechanical problems seen, since it is far more pliable and wear resistant.

The copper pads wore unevently but retained their basic shape and function. Using copper alloys such as Beryllium copper would reduce significanly wear, if needed. The braids used to connect the copper pads to the bolts for the power outlet lugs worked surprisingly well for so flexing over 700'000 times.