High-seas piracy has emerged as a modern-day plague. Commercial ships are regularly hijacked and crew held captive until large ransoms are paid. Thanks to new non-lethal, remotely operated high power water canons, pirates will no longer have such an easy job.

In recent years, ships sailing around the horn of Africa have come under increasingly daring attacks from pirates based in Somalia. The now familiar scenario involves small powerboats carrying a few people armed with assault rifles and RPGs, boarding the ship, taking control of it, and bringing it back to shore. The pirates then start negotiations that often last several months, leading to a large ransom being paid before the crew and ship are finally released.

For safety and legal reasons, the vast majority of merchant ships do not carry lethal weaponry making them an easy pray for these pirates. There are cases, however, where ship crews have successfully used non-lethal defensive techniques and avoided capture. One of them is to use fire hoses to push away assailants as they approach or attempt to board. While effective, the people holding the fire hoses become targets and are being shot at, forcing them to eventually run for cover. Using water canons with a much greater force than fire hoses, and that can be remotely operated from a safe location, lets this repelling technique be even more effective while making it much safer for the crew. 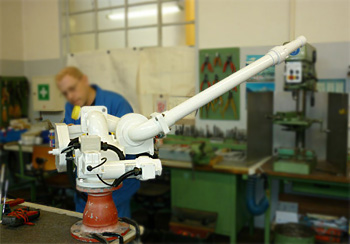 It is in this context that an international shipping company approached Mirage Services to control motorized water canons for its vessels. Located in Stoke-on-Trent in the UK and servicing customers across Europe, Mirage Services is an automation and controls company with a long record of achievements, notably in the area of Automatic Guided Vehicles for the automotive manufacturing industry. The company's skills span the fields of mechanical and electrical engineering. Mirage, who is a Roboteq Solutions Partner, had already done several projects using the AX2550 motor controller. Based on their good past success, Mirage proposed a Roboteq-based solution again.

The challenge of this application was to provide precise and reliable controls. The operator controls for the canon servo motors are from two joysticks manufactured by Apem. These joysticks are based on magnetic hall sensors and will operate in the most hostile environment without wear. The Roboteq controller will directly accept Pulse Width Modulated signals as command inputs. The auto pulse width calibration feature of the AX2550 was particularly useful when setting up each controller. 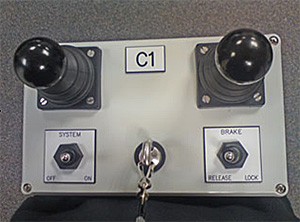 The X and Y motors that are mounted on the water cannon are operated in open loop speed mode. In this mode, the motors are simply commanded to go faster or slower based on the joystick position. Since the Roboteq controller support regenerative braking, motors immediately respond to a change of command, whether commanded to go faster or to come to a rapid stop. The controller's ultra low transistor resistance and the uses of Synchronous Rectification technique, give the motors high torque even at very slow speed, making the aiming very precise.

Mirage successfully completed the prototype and is proceeding to manufacturing the control systems in series. The system has being deployed to the actual ships where it has gone through full scale testing. The water canons and their control systems are working well, shooting a powerful 3,000 liter/minute jet up to 50 meters away, with the controls reported as being very effective and precise.

The ships which are being equipped with theses systems will soon be transiting high piracy risk areas. While we all hope that the canons will never be needed, all who participated in this development will take great pride should one of these ships come under attack, and successfully repel its assailants as a result of the efforts and ingenuity put into this system.