Using RoboteQ controller to bring a replica R2-D2 to life

Star War's R2D2 has inspired a generation of engineers and engineers-to-be to poursue the field of Robotics. If you ever dreamed of having your own droid, this article will shows how you could.

This is an overview of how I integrated RoboteQ controllers into my replica R2-D2 project.

Overview of the Project

Kids of all ages know and love R2-D2.  Since seeing Star Wars at an early age, I'd dreamed of having my very own droid.  After almost two years of hard work I have a full-size replica that looks and sounds like the original R2-D2.

There's no kit for building an R2-D2.  There are basic plans and components made by other fans and a community of builders from all over the world who are willing to help.  It's up to each individual to decide how to build their R2-D2, and everyone makes different choices.  My R2-D2 replica, is mostly made from aluminum, but I could have just as easily used wood or plastic.

People are sometimes surprised at how big he is.  Standing almost 3 feet tall and weighing close to 200lb, he is definitely in the league of some of the larger battle bot type robots some of you may have seen.  With that comes some challenges of getting him moving.

Building an R2 draws on knowledge from multiple disciplines, basic engineering to machining skills to electronics to painting.

The standing joke is that R2-D2 is a really badly designed robot -- he's not very stable, can be top heavy, has all sorts of stress and structural problem from his leg/shoulder design.  But our goal is to replicate the real R2 as closely as possible, flaws and all.

Some of the challenges with building such a heavy droid have been:

In their simplest form, most mobile droids have the following basic components

In addition, a lot of builders strive to add as many gadgets as they can to mimic what the real R2-D2 had in the movies (and, yes, the jet propulsion was totally CGI). 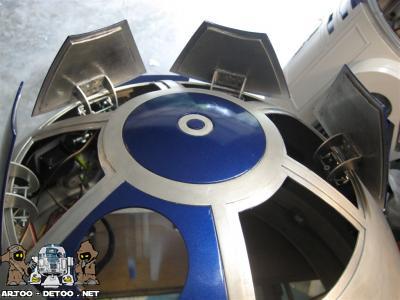 My droid has gone thru several iterations, which you can see in my blog and photo gallery, but in the current configuration he's using the following components:

I know that some people with lighter droids have successfully used the AX500 and AX1500 controller for the drive system.

Current run-time on the two 18AH SLA batteries is roughly 7 hours, but it can vary depending on terrain and distance traveled.

The following schematic outlines the 3 main areas of my electronics setup: 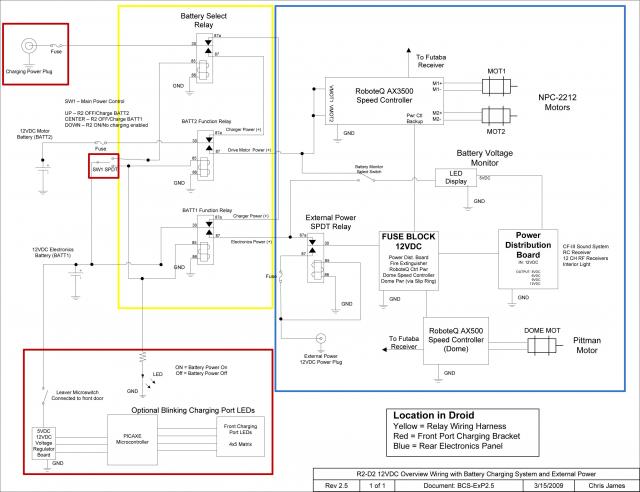 There's also a PDF version that maybe easier for printing.

For control, I use a Futaba 10C coupled with a custom RF key coder that is used to trigger sounds and pre-programmed sequences. 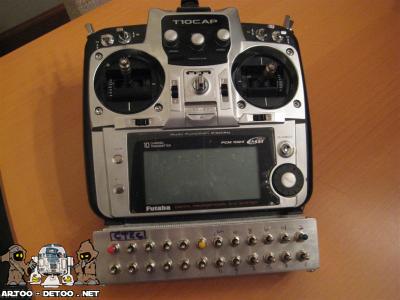 Most all functions are user operated, such as the drive system and dome rotation, but some of the gadgets are controlled by small discrete micro-processers (PIC/PICAXE)

Having your very own R2-D2 is a lot of fun, and the combination of the RoboteQ and NPC-2212's in my drive system have been rock solid. 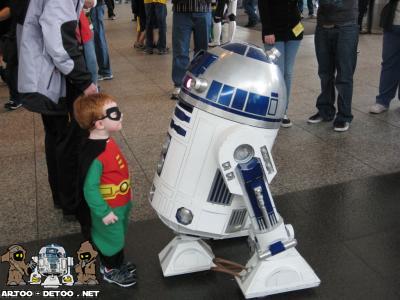 Full details on my build can be found on my blog at www.artoo-detoo.net, and if you'd like to connect with more R2 Builders then check out www.astromech.net