The Truth about Amps Rating

Max Amps is one of the most important criteria when selecting a motor controller. Different vendors use different approaches when rating their products making comparison difficult. Here is how you can sort things out.

Whether you are shopping for a motor control IC, or a complete motor control system, Amps is typically the most important selection parameter. Marketers at Chip and Systems companies know it and this is why they usually publish the highest number they can get away with. This results in the bizarre situation where tiny motor controllers - as those sold to RC hobbyist - are sometimes rated 100+ Amps, while professional products need to be physically considerable larger for the same rating.

Sorting through these apparent contradictions is not easy because when it comes to Amps rating, the actual story is rather complicated and so can be spun by a good marketer in many ways to reach any suitable conclusion. Here is the full story:

Forget Amps. It's all about heat

Amps only matter because, as current flows in a resistive path, power is dissipated in the resistor and that generates heat. How much power is easy to calculate using the Ohm’s law and the power equation:

Reducing the resistance is the only way to reduce the power: at 0.01 Ohm, the power dissipation becomes 100 times lower, so our 10A now only create 1W of heat which is a lot more manageable.

In a motor controller, the highest resistance path is inside the transistor switches. Additional resistance is in the PCB traces, Amps sensing resistor (if one is present) and wiring, but these only begin to matter above around 50A. In low voltage controllers up to about 200V, the switches are made of MOSFET transistors. These transistors have three leads named Drain, Source and Gate.

Back to our motor controller, we see that we need 4 of these MOSFET switches in order to permit our motor to move in either the forward and reverse direction. So the current will always flow through two transistors and the power dissipation (excluding PCB and wiring) becomes

We could stop here

While we still do not know how many Watts are too much, comparing motor controller systems or chips on the basis of the resistivity of their output stage provides a first objective comparison. This resistance value is published on all motor driver chips, so this comparison is possible when shopping for IC's.

When it comes to motor controller systems, this value is seldom published, although it will be found in all Roboteq product datasheets. Alternatively, some vendors of high current motor controllers will publish the voltage drop of their products at a given Amps levels, for example 0.5V at 100A, and using the Ohm’s law, the On resistance can easily be computed (0.5V/100A = 0.005 Ohm in this example). Manufacturers who do not publish this value, know it nevertheless and you can simply ask for it.

OK, but what about heat?

We saw that computing power in Watts was simple and straightforward. Knowing the On resistance of our various models, we can now easily compare how much power one model will dissipate in heat vs. another at the same current level. A lower power product will run more efficiently, but we still can't yet tell how hot it will get and at how many Amps it will start overheating.

How hot a controller gets depends on how much heat is generated at the transistor and how fast it is evacuated. In other words, in addition to the On resistance discussed above, what cooling technique is used and how efficient the heat transfer.

The drawing below shows the heat path between the silicon chip (where the heat is generated) and the air where it is dissipated. The main elements are the transistor package, the heat transfer pad, and the heatsink. 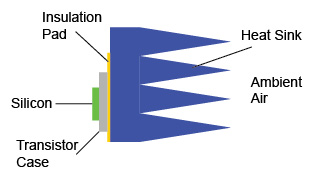 The same construction can be represented by the equivalent thermal circuit below: 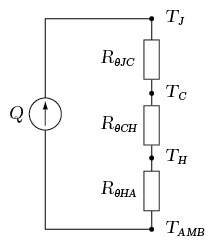 is the power dissipated by the MOSFET.

is the temperature at the transistor case.

is the temperature where the heat sink is attached.

is the ambient air temperature.

is thermal resistance from junction to case.

is the resistance from the case to the heatsink.

is the thermal resistance of the heat sink.

To know how much power can flow through the transistor before it overheats, the calculations are as follows.

, is maximum power that the transistor can be allowed to dissipate.

Let us plug in some sample numbers. These numbers are based on the MOSFETs and case used on the Roboteq HDC2450 motor controller

The result is then:

For example, assuming a Roboteq HDC2450 with a total switch resistance of 2.5 mOhm, we calculate

What does this all mean, ... practically?

First, the good news is that the physics are clear and easy to grasp.

But we also see that the final result depends on the environment, and more specifically the ambient air temperature. One way to twist the number is to make different assumptions about that temperature. If the above calculation is redone assuming 0oC ambient, we get 136 Amps. At 50oC, the number becomes 105Amps.

The heatsink thermal resistance is also a big variable because its characteristics change drastically with the presence or absence of an airflow: A strong airflow from a fan will greatly improve the maximum current at which the transistors will overheat - although other elements of the design, such as wiring may not necessarily allow the overall controller to perform at a higher current. If the air is stagnant, or moving slowly, performance can be significantly degraded.

Finally, the thermal inertia of the heatsink mean a very different transistor temperature - and therefore max Amps handling - when the controller is first started, and a few minutes of operation later.

Given that not every vendor uses the same assumptions, comparing precisely amps rating side by side is difficult, if not impossible.

Roboteq published max Amps rating is lower than the numbers computed in this article: The HDC2450, for example is rated 150A for short periods and 80A per channel continuous. These numbers are "realistic" in that can be expected to be achieved in all practical conditions.

When rating the controller Amps, users generally assume that the Amps are those flowing from the battery. In reality, the Amps that matter are those that flow through the motor. It is a little known fact that current that flows through the motor is typically higher than the battery current. This counter-intuitive phenomenon is due to the “flyback” current in the motor’s inductance and occurs when the motor is running at less than 100% power (at full power Motor Current does equals Battery Current).

The motor’s power is controlled by varying the On/Off duty cycle of the battery voltage to the motor from 0% (motor off) to 100 (motor on). Because of the inductive flyback effect, during the Off time current continues to flow at nearly the same peak - and not the average - level as during the On time. At low PWM ratios, the peak current - and therefore motor current - can be very high as shown in the figure below.

The relation between Battery Current and Motor current is given in the formula below:

In such a case, an uninformed user may be surprised to see his controller overheat, or even become damaged, with a battery current of only a fraction of the published Amps rating.

And the bottom line is

There are many ways a vendor can remain truthful and publish numbers that will not always stand real life use. Unless the ambient conditions are clearly described in the product specification sheet, prefer the On resistance, or the Voltage drop to any Amps number. If these numbers are not published, ask the vendor for them. Use this value to compute the amount of power that is generated by the controller. We've seen how to then verify that the controller has adequate heat sinking, but a good general idea can be reached from the table below:

To be safe, use controllers that are rated at least twice your expected typical continuous consumption. And remember that where and how the controller will be mounted in your application, and therefore how well the heat will be dissipated, will make a big difference.

So in the controllers, is the battery current being measured and the motor current calculated as a function of PWM duty cycle or is it the other way around?

0
So in the controllers, is the battery current being measured and the motor current calculated as a function of PWM duty cycle or is it the other way around?
Cancel Update Comment

This is the case on the MBL1xxx and SBL1xxx products. On the FBL2xxx, the current sensors are on the motor wires.

0
This is the case on the MBL1xxx and SBL1xxx products. On the FBL2xxx, the current sensors are on the motor wires.
Cancel Update Comment